A good friend of mine reminded me today that I was created for the impossible. I have to admit, I have been shaken a bit lately. It seems that my circumstances are not aligning to the truth of God’s Word and the temptation has been to let my experiences define my theology… through doubt. That is backwards and the opposite of faith.

Ever since I can remember, if you told me I couldn’t do something, I was out to show you that I could. I have always hated being placed in a box and confining spaces made me uncomfortable.  I was made to walk on water. When Peter saw Jesus walking on water, he didn’t stop to look at the other disciples and what they were doing.  He didn’t let their experience define his reality. He wanted to walk on water because he was created for the impossible. He was looking at Jesus and believed that if Jesus said he could walk on water than he could.

The waves have been fierce lately in our life and at times I have wondered if I had it all wrong.  I thought we were Water Walkers, but it seems we have only been drowning ever since we stepped out.

Way back in the garden, God told Adam and Eve that they could have any tree in the garden to eat from except one. Basically, they lived in abundance. They could have what they believed for. But what was satan’s first move of deception? He contradicted God by saying, “Did God really say…” Friends he has been using the same contradiction for almost 6,000 years now.

Tonight, I realized that we have been at a Red Sea, needing a miracle. God told us we can have what we believe for. He has told us many things on our journey, but the enemy has been quick to contradict Him by causing doubt, “Did God really say…” I have been looking around at others to confirm my calling because it feels uncomfortable to risk my reputation.  But you know what? I have witnessed miracle after miracle in my life.  I have watched Him part the seas many times. I have watched Him multiply and deliver, provide, heal, and make whole. I am walking on the water…with Him. He didn’t bring us out to this wilderness to die, but to finally find out how to truly live and then lead others out onto the water with Him.  That is what I carry and what I am called to…created for the impossible.

When God tells you something, don’t let the enemy contradict Him.  Turn to him and say…”You can’t tell me that what my Father said is not going to happen.  He said it.  I believe it.  And that is final.” Remind yourself of the testimonies of His faithfulness in the past that prove His nature, character, abundant love, and ability to move on your behalf.  You don’t have to convince God to move.  He is trying to convince you to believe. He is good.  And because of His goodness, you can’t tell me… 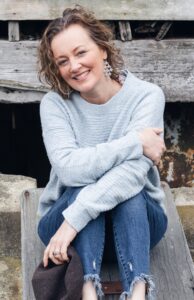